My dad had a dream “Take kids to Europe for a year” 1 of his life time goals (93 things to do before he died.) “Guess what?” one year ago he made it happen. As we go on our plane to Vienna, Austria I am a bit scared and also excited. I don’t know what it’s going to be like in 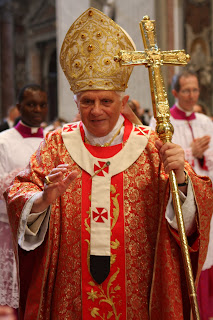 Vienna but I do know they speak a different language. We start at a hotel then move to a small apartment for around 3 days then we move to our apartment that we will be in for four months. It is pretty hard to communicate when you don’t know the language. Weeks later in Vienna we found out that almost everybody spoke English it was very helpful on our trip. A couple days into our trip we start to plan going places like Innsbruck and Salzburg, Austria. You can find out more stuff about our amazing trip like 17,000 pictures and 23 videos all at our family website http://www.wearehereandyouarenot.com/.

We have been traveling Europe a long time and we have visited Berlin to pick up our cousin colleen and we have been to Prague, Czech Republic, Bratislava, Slovakia, and lot’s of places that I cant name. We went back to Berlin to watch the World Track Championships for three days. My mom bought me a T-shirt that I got a lot of world class athletes that were in the WTC (World Track Championships.) I even got the 400m U.S.A Gold medalists to autograph my shirt and probably a couple silver medalists. It’s been really fun to this point. We have moved out of Vienna to go to Valencia for five weeks then to Portugal for a week then to Switzerland where we had my birthday and Christmas (which was really fun). By the time we were done living in Switzerland we were almost half way through our trip. Then lots of fun came in Italy where we lived and skied for three months!!! I learned how to snowboard with my brothers; they taught me how to get down the hill without falling. Like lots of kids my age sometimes you need a teacher and so we got one to teach us do tricks. He was really good and really nice but most importantly he made me a better snowboarder. I tried my hardest to do a 180-degree spin and I did! That’s when I went on more rails and more jumps because I was more confident.

If we learned anything while in Europe for a year it is that shipping things in and out of countries is hard. We tried to ship stuff home but it was not easy and we figured out just don’t ship stuff in or out of Italy. Our shipping problem can be summed up when you hear our “Mom-mom Christmas package story.” It took 2 ½ months to get our presents. By the end of the ski season I did a 360-degree spin!!! Off to Paris but before that we went to Sharm el Sheikh, Egypt to 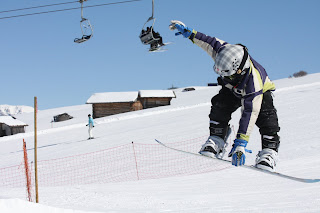 snorkel in the Red Sea. We also went to Athens, Greece and took a cruise for five days to tour the Greek islands. When we got back to Athens we picked up a good friend, Christian Thompson. After a couple days visiting the Acropolis and the Parthenon we headed to Paris. Can you believe I got Chicken Pox and had to miss a day at Euro Disney? We saw the Eiffel Tower and the Louvre where I stood in front of the Mona Lisa. She was not very colorful and it was much smaller than I expected. After a month we headed to Rome where we see the Pope in St. Peters Basilica. It was awesome even though we got kicked out off the front row by a bunch of nuns. The Pope was really old but happy inside I think. He had a funny hat and really red clothes. I am glad we got to see and be part of Mass in St Peter’s Basilica.

Our family has gone to a restaurant that is called Hard Rock Café 21 times all in different countries. You can see some of the funny things we did there and find out more at http://www.hardrock.com/ or http://www.wearehereandyouarenot.com/.

We travelled a lot and stayed in hotels for nearly a month at the end of our adventures. Traveling can get pretty boring now that I have done it for a whole year but it’s easier to travel now since I did it a whole lot. At the end of the trip we went to Nice, France, which was aweso 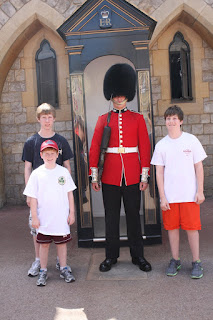 me because I went parasailing over the Mediterranean Sea. We made the mad dash and then we headed to Belgium where we watched Toy Story 3 (amazing) and had Belgian waffles with fruit covered in chocolate. It was then off to London, England “the home stretch.” It had many tourist places so may I can’t mention them all here.

We did so many cool things like 4x4 ATV’s in Sinai dessert, a gondola ride in Venice, skiing in Italy for three months, riding a camel in Egypt to see the great Pyramids and meeting Santa in Rovaniemi, Finland. I had such a great time I would recommend every boy should go to Europe for a year.