The calm brisk Sunday morning was pierced by the latching and snapping of the white and gray alpine racing boots. It’s 7:45 AM and the jitters are already evident in the body language and terse responses to the series of questions I pose. I recall from my past that “Game Day” brought an intensity that is hard for some to understand and I also recall that many teammates had different ways to get mentally prepared. Additionally, team sports are a totally different preparation than individual sports like wrestling, boxing or running a race which require a comfort level with being on the island with overwhelming effort the only way back to the land of civilization. It is the unknown that Eamon is faced with today and that makes it both special and frankly unnerving. Today, his locker room will be a 25 minute ride in a Carolina Blue gondola, irksome to a Duke dad, but some things one simply can’t control. He’s had 4 practices and his coach is the old fashion type, if you can be old fashioned at 30 years of age. When Eamon queries “What do I do?” he simply looks at him and says in broken English with a Godfather like Italian accent, “Go down the hill faster than the other guys and try not to fall.” A bright toothy grin splits his wind burned olive skinned face. Eamon gives him that American teenager look but dare not say what he’s thinking “Are you freakin kiddin me?”

Some things in sports are universal and alpine snowboard racing is no different. There are kids and overprotective parents everywhere on the steep slope, all with different regimens to get them ready. There are boys and girls, woman and men; some with slick expensive suits with shin guards and others like Eamon with an Alpine look that says “beginner” but a freestyle confidence that says “ever jumped 30 feet in the air off a ramp?” We don’t understand the language they speak but you can pick out the leaders fairly quickly and you can see the kids that talk a good game but once in the start house their mouths are faster than their boards. Kids are the same the world over.

Eamon slides over to us as we make our way to the varying vantage points to watch the race, Ann with camera in hand and the lens that can spot a mountain ram on the next peak. He is still unsure of his racing spot but he is proud to flash us his bib that reads #100. I chuckle thinking if that was a Math grade I’d be elated. In this case he’ll be one of the last from the start house. As racer after racer leaves the gate Eamon has a look like he’s the 100th guy waiting to be executed. The quick turns from side to side by kids 5 years younger than him make his anxiety level rise and to make it a bit worse for our teenage boy the first series of competent slalom participants are girls.

The course is a tight steep series of blue and red right triangles positioned so the hypotenuse is to the board side turn side of each gate. Racer after racer scoots by us with varying degrees of success and anxious parents can be seen bobbing and weaving as they mimic the motion of their child coming down the mountain at breakneck speed. The exhilaration can be felt from the start line to the finish line as each racer swooshes by us. Seamus and Pearse look up the hill and ask about 99 times “Is that Eamon?” and “Is Eamon going?” His distinctive plaid, ripped pants (seriously, they’re actually ripped) and brown sweat shirt appear in the start house 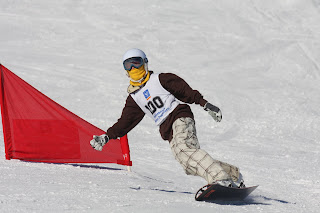 with the small metal timing bar imperceptible at his shin bones. Like in the Spielberg movie ET, my heart and mind are in synch with Eamon’s anxiety as he leans back to thrust himself thru the gate for the mad unknown dash down the extraordinarily steep slope. His slick red/green alpine board is ripping thru the snow and ice but I am too far down the slope to hear the crunching and carving that the change of weight brings. His arms rotate quickly from side to side and in the last few days he’s taught me that “speed comes from the hips.” He navigates the first 8-9 gates and I am thrilled to see such a great 1st run and then suddenly a huge cloud of snow like a grenade exploded under his board and the brown bullet is ricocheting off the course. “What happened?” “What will he do?” are the 2 questions that pop into my mind. These are the moments that define sports. Eamon’s arms are flailing as he inches his way uphill slightly, chopping the snow like his alpine board is a clever to get around that precarious blue gate and he begins his descent again. I know he’s bummed and the energy is clearly drained from him but I am so proud. It is in the correction of the failure that great strength is derived. As he slides by me, I scream to him knowing from experience that he can’t hear me but it makes me feel better. I can see his frustration but he can’t sense my pride. He makes the final gate a 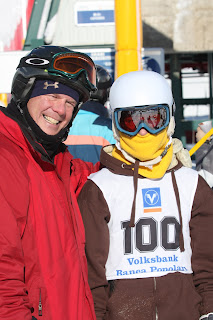 nd dashes to the finish, just out of my line of sight after the last change in terrain, his time 118.4.

I strap into my board and make my way to the finish line. Eamon is disappointed, sad and self-deprecating. It will take time for today’s personal victory to set in and I am reminded of the many many days and contests that didn’t result in the victory. It will be hours if not days until Eamon understands that today he took a giant step towards excellence. A week ago he was an American boy enjoying time in the Italian Alps snowboarding with his brothers. Today, he strapped into an Alpine board, couldn’t understand the gate instructions shouted at him in Italian and leapt from the start house with courage and a desire to succeed with his best effort; him against the mountain and the clock. With the Italian Alps rocketing by like a dream sequence he leaned and carved, and although the result wasn’t for the podium today the memory will be as strong as the effort of my oldest son. Although no one could understand me, I was excited to say “He’s my son!”
Posted by M Glavin at 7:20 PM 1 comment: