The Birth and Death of Jesus Christ...and the Stuff in Between by Seamus

Amazing, life changing, moving, safe, and Religious were the most common words used while my family was in Israel. The four best things about our pilgrimage were we went to the Sea of Galilee, we swam (floated) in the Dead Sea, we went to the Church of the Nativity, and we went to the tomb where Jesus was laid in the Church of the Holy Seplechre.
Our Legatus group met up with us at the hotel and the fun began with our hotel by the Sea of Galilee. The pilgrimage group actually went on a boat, but we weren’t allowed to fish. I wished we did. Also, we got to swim in the Sea of Galilee after our full days of touring. After 3 AMAZING days everyone got on our tour bus and went to Jerusalem for the remainder of our trip. 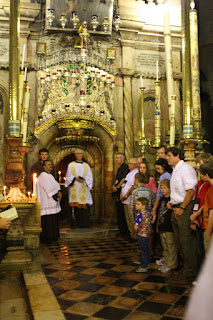 The first day in Jerusalem we went straight to where Christ was buried. Our guide Steve Ray had arranged a surprise ...We got a “solemn entrance.” To qualify for this special event you have to just be arriving in Jerusalem and have never been into the Church of the Holy Seplechre. What happens is an organ player starts to play, they clear the path for the "special people" and the group walks though the entrance to the front of the tomb. The Franciscan monks “chant” in Latin while the ancient pipe organ is playing. Then we are greeted by the head of the Franciscans. When the ceremony is over you go into the Tomb. For me this was totally life changing being able to touch and see where the Messiah lay.
After a few more days, we went to the Dead Sea and swam/floated. At first you can’t feel a difference but when you lay down you start rising up from the muddy mineral rich floor filled with rocks and sink holes. We were only in the Sea for 15 minutes because you get dehydrated if you are in the DEAD Sea too long. Our group had to be careful not to swallow any water or get it into cuts or your eyes. The adults were advised not to shave 3 days before so it doesn’t sting.
Today my family went to the Church of the Nativity. Our Legatus group went to the Nativity Church 2 days before but the line was so long they said we would have to wait 3 hours to see where Jesus was born. We decided not to wait because we knew that we would have 2 extra days at the end of the trip. Those who stayed, had to wait 1 1/2 hrs. before they went down to the birth and manger site. Today, we only waited 15 minutes. The reason why the time was different was our guide for the day knew a trick and we went in through the exit ... the guard didn’t do anything about it. We took many pictures which mom will post. Overall it was a life changing experience.
Posted by E. Glavin at 9:26 PM No comments:

On Sunday, October 11th, we journeyed out to Tel Aviv, Israel, to meet our Legatus travel group. We had a 3 hour plane ride from Vienna, and we felt sorry for the people who's flights lasted over 12 hours. However it turns out that they landed 1 1/2 hours earlier than expected. They headed off towards the Scotts Hotel while Garry, a trip coordinator waited for us, then when we landed we took a taxi. We had a small dinner and headed off to bed for an early night. 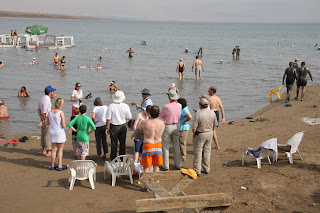 The next 8 days were jam packed with tons of information, ranging from why St. Jerome has a skull at his feet to how to tell what caves were used by people in the early centuries. (The skull represents that St. Jerome is only human; used caves had black roofs due to candles and fires being constantly lit in the cave) 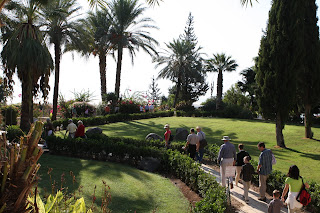 My favorite day was when we went to the Mount of Beatitudes and the Dead Sea. The Mount was a spectacular area, filled with thick green grass, amazing flowers, and a fascinating panoramic view of the Sea of Galilee. Supposedly Jesus stood at the bottom of the mount while everyone sat up the hill, while most think it was the other way around (but it might help being God). He was probably using the wind off the sea to carry his voice, the current technology of the day. Along the paths to the church were stones carved with almost every beatitude.

I thought the Dead Sea was cool because....well its the Dead Sea! YOU FLOAT! Seamus and i took the muck from the bottom and spread it all over out chests, our first skin treatmeant. I look like i am 5 now beacuse the Dead Sea takes off 10 years.
Posted by E. Glavin at 4:15 PM No comments:

Today we travel, on a solo journey, to Bethlehem, to the Church built to commemorate the Holy Family and His birth. We have made the trip to Bethlehem 2x so far on this trip and both have been memorable experiences. Bethlehem is but 4 miles from Jerusalem, but with the winding roads and the Israeli checkpoint to get into the city it seems more like 10 miles. Our first trip brought us to a specialty religious artifacts retail shop. It is hard to describe this store but let's just say its like going to one of the those "pay" fishing holes where the fish are plenty and always hungry. In this case we are the fish! I'd swear I saw fishing poles made of the famous olive wood as I entered the s 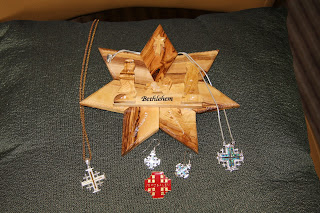 tore. There are religious scene carvings everywhere and if jewelry is your "thing" there are enough Jerusalem Crosses of all sizes, shapes and gemstones to dot the landscape back to the hotel, like Hansel and Gretel. Team Glavin is not immune to the magnetic pull of the ancient olive wood or the shiny lurelike metals of the jewelry. "Bargaining is expected" and the lads chuckled when this announcement was made "on the bus." They shot their mom "the look" and Pearse said "Remember Istanbul!" like it was the Alamo. As we departed the store, pockets a bit lighter and Bethlehem salesman a bit happier, I can't help but think that we witnessed the start of a legacy in a way. Each of the boys will know that when they pass the olive wood carving of the "Exodus to Egypt" and the Madonna standing in their place at our Edgmont home they'll say or think "We bought that in Bethlehem." While the olive wood is heavy and the hand carving intricate I know it won't compare with the "magic" of the life long memory. So, feel free to visit Mike and Steph and see the 2 pieces of olive wood, unbeknown-st to the artist Twamey who turned his fluted wood chisel into Glavin folklore. Oh yeah, could someone tell Mike and Step that the "box" is on its way. It'll be the one marked "Bethlehem."
Posted by M Glavin at 8:25 AM No comments: