It’s not a Sprint it’s a Marathon: 6 Months and Counting 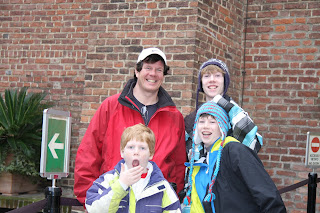 It is an almost impossible task to synthesize the experience of 6 months abroad in Europe with one’s family. My journal is grouped into a weekly collection of some 300+ pages of travel stories, personal musings and experiences. I have read and reread the journal while on planes or trains or waiting in the hotel lobby for Team Glavin to make its grand entrance before we launch a search for a dinner that “everyone can eat” which, by the way, is “PIZZA” the world over. I read and reread in an effort to remember the weeks that have gone by so quickly. There are days when I feel like we just started and there are days when I hope it would end tomorrow. The former feeling is much more the norm than the later.

The travel books are filled with “see this and go there” which we did and continue to do. You know you’ve traveled a bit when you look for certain types of travel books because they have better “pull out maps” than the others! Sometimes the book is “dead on the money” and sometimes I am convinced the author is a “shut in” in Poughkeepsie, NY and never came anywhere near Krakow, Poland or St. Petersburg, Russia. We learned that “4 stars hotels” means something different in every country you visit and the Amadeus Hotel in Berlin got 4 Stars on the Marilyn Chambers rating system where you could get “lucky” but rooms were rented by the hour if you know what I mean.

So how does someone sitting at home in the United States get a sense of what it’s like to be on this magical journey? I am not too sure but I thought I’d share some thoughts and experiences with the expressed goal of giving folks a glimpse into the world that is Team Glavin, a mom and dad, 2 teenagers and a young boy you all know named Pearse.

As the flight touched down in Vienna, Austria the magical mood was like a full gas tank on the RV. You’re not sure how many kilometers it will last but your grateful for the strong, fresh start. We built a list before we left America of things “we gotta do” and we kept that list handy in order to make plans. We did simple stuff like see an Opera in the Vienna Stat Operahaus and watched the Vienna Boy’s Choir live in the concert hall. We went to see the Brandenburg Gate and the 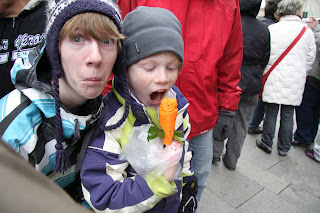 spot where the Berlin Wall once stood and saw a 200m world record demolished in the Berlin Olympic stadium, a stone’s throw from Jesse Owens Street. The “to do” list is long but it gives you some framework and in years to come you know the kids will says “I’ve been there” when Ryan Seacrest says “Here’s how they celebrate New Year’s in the Kremlin” or this is “Mass in St. Catherine’s in Bethlehem where Christianity commenced” which, by the way, we watched on CNN while in Grindelwald, Switzerland. The “places we’ve been and things we’ve done” will act like markers on a treasure map of this amazing 6 month journey. How can the kids or the parents forget the rush hour metro ride in Moscow, Russia or the ferry ride across the Baltic Sea from Gdansk, Poland, home of the solidarity movement, to Stockholm, Sweden home to Nobel Prizes?

There are 1000’s of pictures taken by Ann as a visual chronicle of the journey. When they say a picture is worth a 1000 words a few hours on her Kodak gallery is like a glimpse into the not so private Glavin museum, open for 6 months. It’s not DaVinci’s “Last Supper” in Milan or the Goya’s “Colossus” from the Predo in Madrid. It won’t be studied by millions of college kids in Art History class or by art enthusiasts but it is surely a visual record of the soul of the adventure. There are funny moments captured like the restaurant salesman in Istanbul, Turkey or Colleen’s “hair raising” wind on the hydrofoil from Bratislava to Vienna. You’ll see the precious folded hands of the first Communicant, Pearse, in Capernaum, Israel and the mud from the Dead Sea smeared all over Eamon and Seamus. There’s snap shots of quiet moments captured like the awe of the Cathedral in Toledo and the Duomo in Milan and the setting sun on the Sea of Galilee. There are funny faces on trains, planes and trams and even a few where the kids are actually sitting still. The kids still laugh and say “Not another Church or Castle?” but I’ll bet they will recall theses different places in years to come and a smile will crease their lips as the picture of the cannon ball, bigger than Pearse, in Salzburg Austria will remind them that castles were fortifications first and torture for generations of traveling children later.

So, “What’s it like to travel with 3 kids for 6 months 24 hours a day 7 days a week?” is a question oft posed by stranger, friend and family alike. It’s kind of like opening “Pandora’s Box” and finding out that someone introduced amphetamines into the “box” just before you opened it. No 2 days are alike and the mix of teenager angst, insecurity in a foreign culture and insatiable curiosity makes for amazing days and unforgettable moments. We cherish the days where everyone is well rested and say a silent prayer more frequently than we care to admit, that no one will say anything to interrupt the “karma” train when all is well. The kids are grizzled veterans of the European train system and marvel at the “public transportation system” as it is a way of life in all of the major cities. They make their way through airport security like traveling salesman on a Monday morning in any American city, fast and streamlined. As expected the biggest challenge is keeping them fed, separating the tired from the rested and locating doctors and dentists when needed. It is one of life’s simple pleasures to watch Eamon make a video come to life and see “what he sees” as the most important parts of a city just visited. Seamus, we’ve learned, is funny in every country in Europe and “ginger haired” Pearse would fetch a pretty good price in Istanbul if you were still allowed to sell kids. Trust me there are days when I think that law should be revisited if not overturned!!! In a nut shell, our kids are the catalyst to the most memorable vacation experience known to man. 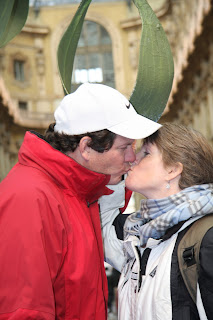 Finally, I say to you, for it all to work you must “love your wife” and she must “love her husband.” There are amazingly long days punctuated by the stints of overwhelming boredom. It is these moments that pose the greatest of challenges. Perhaps it is something in the human genome, I don’t know, but it is these moments that bring about the greatest test of compatibility. We’ve learned that a nice cold walk or a fine glass of wine is a much better antidote than the answer to the incessant question “What do you want to do?” followed by the reply “I don’t know,” “What do you want to do?” We joke that I am the human pack mule and Ann is the human GPS but in the end we’ve learned that we need each other more today than when we left in July and that is the greatest gift we’ve received on this wonderful adventure.

So I leave you with this thought, while there is truly evil in the world, as we saw in the concentration camps of Auschwitz, there is so much beauty and so much in which to delight. Our 5 has become 1 and that is the truest development of this fine and extraordinary sojourn.
Posted by M Glavin at 3:51 PM 1 comment: