The Deepest of Faith at Lourdes

I sat on the hard metal seat, olive wood rosary in hand that we got while in Israel, staring at the Blessed Mother Statue in “The spot” where she appeared to the young girl Bernadette. There’s 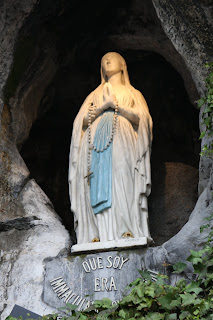 an eerie quiet as you look left and right seeing so many amazing things it makes it difficult to process. I spend the better part of 45 minutes trying to codger in my mind the words that folks will hear from me in response to the question “What was it like at Lourdes?” I can’t say I came up with an answer until I watched the most amazing display of love, affection and faith.

She could have been anyone’s mom or grand mom. The black, auburn, or brown color of her hair clearly sacrificed to the altar of a hard life is left as white as a pillow. Her sweater was royal blue, clean but a bit more worn than even she would like with a string here and a worn elbow there. Her taupe colored shoes were cushioned and sensible and had years of experience that said “pumps are long past for me.” Hers was the simplest of looks, a weathered face with a hint of red perhaps rouge but the odds favored that the wind whipped too hard from where she came from today. Her clean fingers, slightly bent and swollen at the knuckles suggested years of work that begets the clear sign of arthritis, are wrapped around the plastic handles of the wheel chair. It was an old style wheel chair requiring someone to push it or someone to grab at the wheels and make it work. The 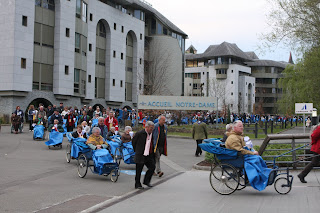 canvas back that held the two sides the proper distance apart was cracked with age like an old painting or like the lady pushing it ever so gently as it rolled by me.

She approached the grotto with her charge. He was wrapped in so many blankets it was difficult to disseminate the age of the boy. This elderly woman, with the greatest of effort, pushed him towards the ramp of the Grotto. To her left people were streaming by but she remained resolute. She pushed a few yards at a time; the age of the wheel chair creaking in a way that left no doubt that it had many years on its wheels. She stopped every few yards to catch her breath, I thought, but I was clearly mistaken. As she came within ear shot I could hear that she was praying. It was a romance language for sure but barely perceptible and I couldn't make it out, maybe French or Italian. She was having trouble with her wire rimmed glasses, trying to keep them on and at the same time trying to keep the other hand on the wheel chair. She passed so close I could hear her breathing; it was a bit heavy given the need to push the chair on the uneven stone as she approached. I could then see that her “glasses” issue was related to her tears. The water from her teary eyes combined with the undulation of the wheels striking the expansion cracks in the concrete created her challenge. As she slowly knelt 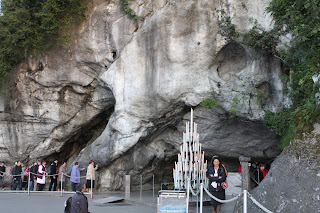 down next to the wheel chair and in front of the altar she prayed. Her posture was like that of an 11 yr old girl at her first Mass as an altar server. The boy in the chair was as quiet as a mouse as if he’d experienced this scenario a million times. There she stayed, kneeling on the hard ground deliberate and unphased to everything around her. The only movement came as her head bobbed from a bow before the Altar to look up at the niche where the Statue of the Blessed Mother is nestled. In her hands, almost imperceptible, is a rosary. Her back heaves up and down, slightly labored as she finishes the last of the Hail Mary’s. She struggles to her feet suggesting a shot of oil to the joints is needed to make them work.

It was as if time stood still. She got behind the wheelchair and positioned it to make the 6” ascent over the stone step onto a ramp that has seen millions of handicapped and infirmed cross over its path. She pushes that boy, wrapped in blankets wearing a bright colored stocking cap towards the rock. She seems renewed in her strength. She pushes the chair with one hand and reaches the other to the grey and black mountain wall to her left. The surface of the wall is now like polished granite from decades of Pilgrims tracing the same path as this woman. After she touches the wall, she takes her small hands, leans over to the boy and rubs his head and hi 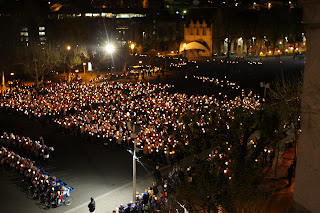 s eyes. He is immobile, he is blind and he can’t do it himself. His mom or grand mom holds him tightly and strokes his face, love oozing thru her to him trying to help him feel the coolness from the rock as she looks again to that nestled statue of Mary. She pushes him a few more feet and repeats the same thing, tears streaming down her face as she places the residue that is the wetness from the cold rock as the sun has already set behind the Pyrenees. She passes behind the Altar, not forgetting to bow to the tabernacle, and rubs the rock vehemently under the statue of Mary as if to say “Please please, please” help him. Her eyes are red, her heart is heavy her faith ever-present.

She rolled him down the ramp, bowed to the altar and wheeled him away. She is Lourdes!
Posted by M Glavin at 4:09 PM No comments: