Oceanographico or Aquarium You say “Tomato” and I say “Tamato”

We collect ourselves at the elevator, on Piso 29, and the need to “split up” is apparent as 9 bodies is a number too difficult for the small metal carriage called the “lift.” Naturally, Pearse reminds us of one of his early observations in 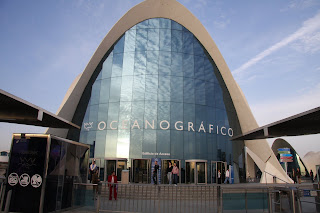 European travel, “If the elevator goes ‘up and down’ how come they call it a lift, isn’t that just ½ the job?” Kids are so smart these days. We let the folks that lived in England answer that one for the eager “ginger haired” Pearse. Pearse, Doreen, Andrew and mom-mom ride the “lift” to the ground floor and Pearse emerges happy and excited with a bit of a doubtful air of “still doesn’t make sense to me” shoulder shrug. It is a slower but no less enjoyable walk for Team Glavin.

Today’s quest for fun and educational content is taking us to the aquarium. It is the largest in Europe, making the kids chuckle when they hear that fact. They chortle as that is a favorite line of many “tour guides” and as they have become “tour experts” they are a bit suspicious of the lines that start with “First ever, best collection, only one of its kind etc.” Here’s to hoping that their cynicism is tempered for times that are appropriate as sometimes there are scientific facts, theorems and corollaries to back up such statements. You know E=mc², and stuff like that.

It is a pleasant walk to the Oceanographico, down the “main drag” of the Arts and Sciences Ctr. of Valencia. The temperature is fittingly warm for a walk to an aquarium and mom-mom roars with laughter when I quip “At least I’m not making you go to the zoo when it’s 90 º and 90 % humidity.” This walkway used to be a river that ran thru Valencia but after many floods the engineers diverted the river and now the entire riverbed is home to amazing buildings, and a beautiful park and greenway that bustles with activity like runners, walker’s, bikers, and the occasional guy practicing his “bar bottles” juggling act like Tom Cruise in the movie “Cocktail.” Don’t pretend that you haven’t seen that movie!

As we approach the gates to the modern and architecturally stunning buildings, we see the signs “no flash photography, no food/drink, no chewing gum, no ______.” Eamon blurts out “I guess you’re allowed to have guns here”. As he shared with Andrew, “In Israel” they were clear on their signs “No guns, no hats, no bikinis, and no flash photography.” Oddly, in Israel, it didn’t appear that one “no” was more or less significant than the other. Naturally team Glavin had a back pack full of Gatorade, water and the well hidden bag of M&M’s. Leave it to us to be standing in front of the entrance gate chugging a ½ gallon of Gatorade. We weren’t wasting it since that Gatorade powder traveled across the ocean to get to us. As we placed our bags into the x-ray machine, yes I said x-ray machine, the jokes were flowing. “I guess they are looking for the guy with a harpoon”, a Moby Dick joke or two since there is a white Beluga whale here and we manage to “pass security”. Just as I lift the bag off the conveyor Sam yells “Hey, Uncle Maurice, they didn’t find the water bottles in the bag?” Sam still needs some travel seasoning and Seamus and Pearse usher him quickly ahead whispering something along the lines of “not now big guy.”

And so in we go and see the “fish”, thousands and thousands of “fish”. Everyone’s favorite is first on our list, the shark tank. The menacing beasts are gliding by increasing your heartbeat even though you know you are safe. We’ve all seen too many movies and as a result you tap on the Plexiglas just to signal your brain “yep, plenty thick” There are all different kinds of sharks some more fear invoking than others. A few go by the overhead tank and glide past ever so slowly as if he can sense the fear through the glass and with a quick snap of the tail reminds you that he’s the real deal, fast, agile and mobile. Is that the soundtrack from JAWS? Just kidding!

There are several buildings with all different displays. There are placards everywhere with educational information about the genus and species of fish. The colors are as plentiful as any artist’s palette. The fish are sized from the miniscule to the amazing Beluga whale and the sea walrus in between. The Dolphin show was at 15:30 hrs. I’m still a bit fuzzy on 24hr clock thing 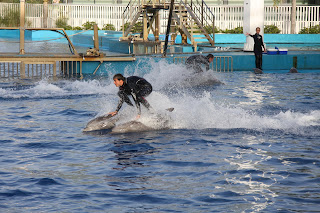 but in the end we managed to be seated in the arena in time to watch “Flippers” relatives amaze the crowds, pirouetting, jumping in unison, hula hooping, and acting like jet skis for their want to be fish, wet suited, trainers. The crowd “ooohed and aaahed” and that is universal as we didn’t understand a Spanish word anyone said during the show. The dolphins didn’t seem to mind that there was a Yank or 2 in the crowd.

So we leave the aquarium, happy to say “we saw the biggest oceanographic edificio” in Europe. 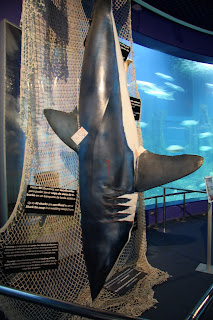 1. We couldn’t seem to find any cats around.
2. Why did they have a bird exposition (pelicans, flamingos etc. etc.)?
3. They give you a red brimmed straw hat if you buy a large beer.
4. Why can’t you bring in bottle of water to an aquarium?
5. There’s chewing gum under my seat at the Dolphin Show, what X-ray machine?
6. Is there a 1000 Asian in every aquarium, museum, Church waiting for us to arrive?
7. Aquariums are just easier on the nose than the zoo.
8. We looked and looked but didn’t “Find Nemo.”
9. Come on everyone knows that man is the biggest threat to the ocean!
10. Our favorite “How come the cafeteria doesn’t have filet of fish sandwiches?”
Posted by E. Glavin at 4:41 PM No comments: