3 Boys and a Dad meet Fagin’s Understudy in Barcelona

The day started like many others for Team Glavin in Europe. The hotels grip was strong and the warm comfort of the bed even more intoxicating. Long gone is the 6 AM wakeup call replaced instead by the alarmless morning punctuated by the late sunlight of the beautiful Fall November day that awaits us in Barcelona. The streets of this Spanish city are narrower than most we’ve encountered, if that is possible, as we make our way to a patisserie looking for croissants and a coffee/tea. We pace by retail shops and apts. mixed together like odd couples.

It is a successful late morning as we find a place that actually makes real bacon and eggs (scrambled for Eamon) and instead of a croissant we opt for the “whole 9 yards” and get to do the breakfast/brunch thing. We lay out the plan for the day to the “sighs and eye rolls” of the kids which is a tell tale sign, to the trained eye, that we are headed to a few Churches and “tourist” attractions. First visit on the list is the Barcelona Cathedral.

Narrow alleys and streets and tall city buildings hide the direct sunlight and facade of the Cathedral but the flow of pedestrian traffic and the multiple languages, including English, is forensic evidence that we are on the right path to the Cathedral. As expected, the Cathedral is picture postcard perfect. Its exterior facade is under construction/renovation like so many religious and government buildings in Europe but its interior is a testament to man’s ingenuity. There are magnificent statues, stunning paintings and Religious relics preserved by kings and queens. The Monstrance is only second in beauty to the 10 ft high one we saw just weeks ago in Toledo’s Cathedral. As you kneel to pray one wonders, quietly, “How many prayers have emanated from within this building over the centuries?” A quick check with the boys on this question and Pearse is probably closest with his estimation “probably a cagillion!”

As the kids slide down the railings outside the Cathedral, to the dismay of some and the delight of others, we begin the search for the Metro. I always notice a difference in demeanor when we leave a Church of such magnitude. It is hard to put into words but for Catholics it’s like the feeling you get when finished Confession, your feel good to your core and you have a jump in your step. I’m not sure that is the same feeling for the kids, just yet, their excitement is more related to the fact that there can’t be that many more Churches left in Barcelona, “Can there?”

The pain is visible when we tell Eamon, Seamus and Pearse that Sagrada Familia the next stop on the agenda is a CHURCH too. It is a Gaudi masterpiece and certainly a “not to be missed” item on anyone’s agenda visiting Barcelona, unless of course you are under the age of 16. Seamus tries to talk us into renting bikes to make the trip to the other side of town but 5 Glavin’s trying to make it around the city on bike’s would be cause for alarm for the pedestrians of Barcelona. No, instead we search for the red “M” and ask a few folks “Donde esta Metro?” A few points of the fingers from Spanish strangers and we’re descending the staircase into the subterranean.


The mood is mixed for Team Glavin, as is often the case with 5, some moodier than others. The platform is crowded and the conversations confusing to the American ear. There is a noticeable change in the air as the subway car approaches, pushing out the old air and replacing it with the man made wind from the front of the streaking Metro car. The Yellow line will take us right to the Gaudi Church and it is clear that many many tourists are using this line. A quick scan of the platform before the doors open and you see backpacks and tourist maps in hand, like cotton balls blooming, from one end to the other. It is as crowded as any platform we’ve been on in Spain.

The ping of the bell and the “dance begins”, the door slides sideways and folks stream out, you peer in quickly trying to define the path as you make the dash with kids in tow to find a place to stand. The car is packed and the best you can hope for is rail to hold or steady feet so you don’t run into too many people. The kids enjoy the mashing of bodies in a weird sort of way and Pearse looks like one of those pink snooker balls on the table bouncing from side to side a mixture of delight and panic on his face.

A short, pock marked faced Spanish guy is chatting me up. A lady says she is from Southern Georgia and asks “Are you on vacation?” She sees the boys and the backpacks and corrects herself. My newest Spanish friend is asking “This you stop?” I shake my head “No”. He persists, “You sure not you stop?” I tell him I am sure a bit miffed that my head shaking “no” didn’t translate to Spanish the first time. The car jolts to a stop and most of the standing passengers lurch backwards from the force. The dash to find seats and readjust as the “ping” signals “door open.” There’s a woman standing outside the subway car “arms flailing and knocking on the window.” I think to myself “Welcome to the city, a nut for every Plantar’s Jar.” She raps the window and points to her purse. Naturally I giver her the international sign for “I don’t understand” a shoulder shrug. She is insistent and pointing at me and then her purse and BANG, it hits me. I scream to team Glavin “Off the car, now” the subway door pings giving all notice that the doors are closing. I squeeze out the door, adrenaline rushing like the feeling you get when the school yard bully tells you “I’ll see you at recess.” The lady points like a statue and says something along the lines “that way.”

“How could I be so stupid?” All the signs were there, crowded platform, tourists everywhere, “yellow line” that takes you to the famous Church and multiple exits and Metro lines? I’m a city guy, kind of. I am jumping the steps 3 at a time, heart racing and mental gymnastics, trying to get street side so I can look at the 3 other exits. I know who I am looking for and am hoping he will pop up thinking the “car is gone, I’m home free” As I look vigilantly, Eamon, surprisingly, comes up behind me. He says “Dad, you okay?” I look at him a little hurt and a lot pissed off and that’s a combination he has never seen in me. I ask him “You know what’s going on?” He looks at me “Yeah dad, you got PICK-POCKETED, he got your wallet, right?” I respond “Yes” a bit surprised at his accurate conclusion. He said “I know what he looks like it was the little fat guy with ragged clothes, right?” I tell him “it’s usually a team” Keep looking at people coming out of the exits. I already know that the thieves are long gone but I still hold out hope that they are “stupid criminals.” Eamon is angry and Ann is corralled with the other 2 boys in the subway station. She doesn’t want to burn 3 more subway fares by leaving the station. You gotta love that about her! Eamon and I descend the stair case from the street, Barcelona Cathedral in the background, dejected and unsuccessful. We will huddle and discuss the “plan.” We make quick calls and type in some quick txt messages to the United States and start the process of acquiring the numbers to have all the credit cards “turned off.” We grab the metro and head to Gaudi’s famous Church. The information is popping on our cell phones and in the shadows of the grand Sagrada Familia Church we make calls to cancel personal and business credit cards and reissue new plastic. The sum total of the damage is NO money i 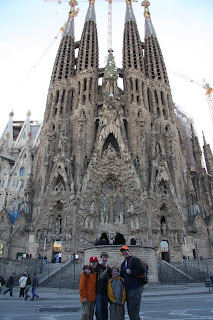 n the wallet, no charges to the credit cards before we “shut them down”’ and a lost PA Drivers license and healthcare card. We all look at each other grateful that no one was hurt, no money lost and 3 boys learned a valuable lesson, life has its challenges.

Later in the evening I think to myself, what a bizarre feeling Barcelona Cathedral, a pick-pocket and Sagrada Familia Church, an evil sandwich!
Posted by M Glavin at 11:36 AM No comments: 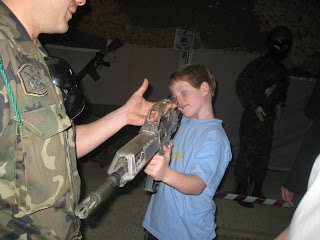 Yesterday my dad told me, after his run, that there was a bunch of military equipment at a place about a mile and a half away. It was a 300 year celebration of the Spanish Cavalry. My dad said it would be pretty cool if we went and about a hour later we did. The 1st camoflouged tent we went in was the coolest one of all because you got to hold a training gun and a real gun! The teaching gun, made of plastic, was heavy about 5 to 8 pounds but it wasn’t a real gun. It was designed to teach the soldiers how to use the real gun. The difference between the 2 guns was 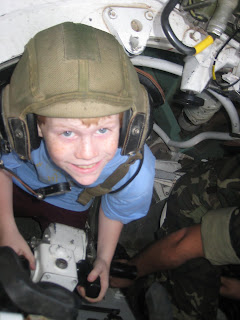 that the real gun had an interchangeable grenade launcher and was made of matte black metal. The other equipment in the exhibition were awesome tanks, armoured assualt vehicles and communication vehicles. I especially enjoyed learning how to use the turret gunin the assault vehicle. I learned how to turn the gun and about the special aiming mechanism that included a mirror and how the ammunition gets loaded. It was a cool experience here in Valencia Spain.
Posted by S. Glavin at 7:03 PM No comments: