“The Call to Prayer” or In Our Case Shopping 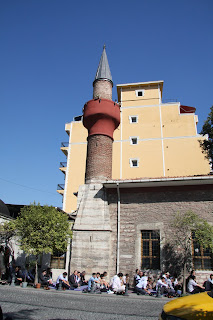 Two Days in a row “The Call to Prayer” echoed 5x per day in Istanbul, Turkey. The piercing sounds of the ancient Arabic language emanating from the speakers of the mosque’s minuets give us pause as we recounted the lessons of yesterday’s tours of the famous Blue Mosque and Santa Sophia. The pace is harried in the city streets and the buzz of commerce is everywhere from morning until late late night. Our hotel windows face one of the busiest streets in Istanbul and the melody of the staccato car horns mixed with the screaming voices of the street merchant’s, soundslike the crescendo of a Turkish Opera. You weigh the difficult choice each night of noisy city street versus quiet but suffocating hot room. The boys opt for quiet and the dad opts for cool but noisy. We are a long way from Edgmont, PA that is for sure. Kebab anyone?

The Grand Bazaar of Istanbul is today’s activity. The stores, if you can call them that, number 4000 and it is a labyrinth like maze of porcelain shops juxtaposed to leather shops. You can buy underwear right next to Turkish carpets and order a shot of steaming hot tea while perusing your favorite PRADA pocketbook knockoff. As we approach the ancient stoned archway you half expect the genie to jump out of the lamp and utter his famous “Your wish is my command.”

The boys notice that there is a spring in their mothers step and that something is just a bit out of kilter as we can see the entrance to the Grand Bazaar but a few hundred meters away. I chuckle and tell them to watch and learn. Seamus looks a bit befuddled as he’s never really seen his mom’s “shopping game face.” None of the boys have been privy to the Incredible Hulk like transformation of “Bargain Seeking Mom”. With each step she morphs into a negotiating machine with a glance here and a wave of the “don’t bug me” hand there. The Turkish salesmen think “easy mark from America” but look like guys left home on Prom Night as she utters those hurtful words “You’re price, not even close!” Eamon looks and says “Who are you and what have you done with our mother?” We’re pretty sure her eyes are turning green, “everyone watch out and whatever you do don’t make her angry by not negotiating or you will be sorry.” The kids get a kick out of their mom looking a guy right in the eye and saying “you want 60 lirasi I’ll give you 20 and that’s final.” Too bad she can’t negotiate tuition for school; now that would be great!

The boys split off on their own because Seamus and Eamon are each eyeing a pair of Chuck Taylor Converse sneakers. They ask “Hey can we go see if we can bargain?” Sure, “remember they have to give you the price first”, yeah we know said Eamon. Ann, Pearse and I headed off to watch mom torture some more Turks. 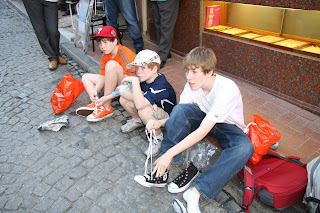 Eamon and Seamus meet us on the way to the arched entrance. As they come into view they are grinning ear to ear. Mom asks “So how did you make out?” Seamus and Eamon “He wanted 45 lirasi for each and we said 55 for both or we’re walking.” They open the bag and Seamus’ neon orange low cut Converse shoes jump out of the bag by themselves and Eamon’s high top Chuck Taylor’s are barking “take me home my American friend.” A cool look of satisfaction from their mother and Pearse’s nod of approval says it all, “Life Lesson Learned - Price tags are simply suggestions.”
Posted by M Glavin at 6:39 PM No comments:

Is that Lady Dancing on the Table?

It didn't take long to "experience" Istanbul in all its metropolitan glory. The ride from the airport is 16 kilometers, 10 miles give or take, and it took us 1+ hours. We weaved in and out of traffic and dodged young boys hustling through the streets with cellophane wrapped boxes piled higher than Shaquille O'Neal. The streets are narrow and filled with cars, trucks, people and textiles spilling from the sidewalks. There are the sounds of middle eastern music mixed with the occasional MTV rap soundtrack wafting through the windows of the van. We are on a main drag in old town, a slow ride by car but the trip is filled with the action of the boys head spinning as if there necks are mounted on ball bearings. Linda Blair would be proud. It is 10 miles of "look at that" no "look at this". Pearse asks "Who is that guy on all the banners?". "That's Ataturk my son" but that lesson will have to wait as I am not sure who is driving the van and where he stands politically. Come to think of it, how do you really know if the guy is actually taking you to your hotel???? A question oft asked I bet. As we pull up to the hotel, I find it ironic that we are staying in the Best Western of the eastern Istanbul,Turkey.

"Check in" at the hotel is quick and painless. The bathrooms are clean, the beds are adequate, the internet is working and the kids are happy. That's what we call a travel day HOME RUN. The troops are hungry so it is off we go to see if we can find "turkey in Turkey", hey I can't make this stuff up.

10 meters from the hotel is the alley that leads to "FISH street." 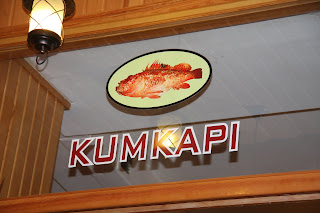 A quick left and we are bombarded by the smell of fish and the sounds of commerce. Restaurant after restaurant is set up "cafe style" with chairs and tables outside tightly packed in a "get to know your neighbor" configuration. Each restaurant has a "bird dog" salesman who works you fast and hard to get you to sit at "their" table. We run the gauntlet, literally. The kids decide it will be a fun game to "count the solicitations" and so we bob and weave our way back up the street with the word, fish, "kumkapi", lit up in rainbow-like neon colors.
We left the hotel thinking "pizza" and now we are just hoping to survive the smell of fish and the onslaught of "Turkish commerce." We are the perfect "mark" for the salesman and you can see them lining up to talk to us like we are celebrities. While we'd like to think it is our stunning good looks that has the multi-lingual sales pool in a frenzy, I suspect that it is the Anglo-Saxon, travel dressed family of 5 that has them excited. So this is what it's like to be a trout that a fisherman can see as he looks to pick the perfect fly as bait to land the big one.
As we near the last few restaurants the kids are at 8 sales pitches and so far so good, we're almost out of the gauntlet. Just 2 more to go and we'll be back on the streets of Istanbul. Then it happens, "we have Pizza for the little one" and he knows instantly that he has a bite and when he shows us the picture I could almost feel the fish hook "set" in my wallet.
Our host busied himself getting us organized. 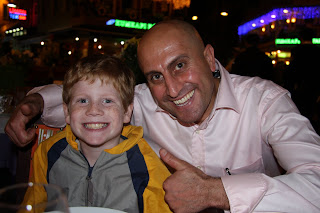 They sit us front and center so that folks can see the "Americans" as they progress down the road. We've become the salesman's new tool "look we have many families that eat here." Seamus comes up with an idea when he sees what's going on with the Turkish sales pitch. He calls our new friend over and Seamus says "Hey if I can get 4 other tables sold for you, do we eat for free?" Man I like how he thinks!! The salesman laughs grabs Pearse's cheeks and says "you bring me great great luck tonight".

It is a night of revelry, stomach twisting laughter and experience building observations. There is a couple from the USA next to us and across the way a couple from Russia and another from Canada. 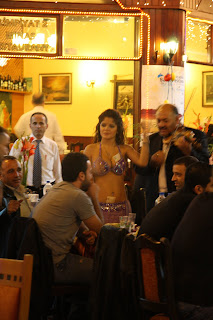 It is fair to say that we provided them with hours of entertainment. Of course there was plenty of material for laughs, for instance when you picked your fish they brought it out, "head and tail" still intact, in a wagon with a bed of ice so you could see it before it went to the chef. Eamon looked at the fish and said "poor guy, now that's a rough day." At a table next to us they poured a liquid gel on a mound of salt and lit it on fire. There's nothing quite like "fire" to get the attention of 3 boys. It burned fluorescent orange and then hot red to almost blue. Once the flame died out the waiter cracked the salt pile and inside a steaming white fish. As the kids stared, eyes wide open, I hear the feint sounds of castanets in the distance. I know what that means and by the time the fish is served to the table behind us the boys turn back and see their first "belly dancer." "Is she on the table?" asks Pearse "I hope she doesn't get in trouble!" Eamon and Seamus not quite so sympathetic as they chuckle to each other as if their mother can't hear the teenage banter. As we leave kumkapi alley Seamus leans over and says "Dad, I could hang here all night."
A great first few hours in Istanbul!